Coping with steroid-toxicity has become an integral part of the treatment experience for patients with inflammatory disease for more than 70 years. With the development of new immunomodulatory agents, the opportunity to reduce steroid-toxicity while improving therapeutic efficacy is becoming a reality. A new paper published in Seminars in Arthritis and Rheumatism highlights how the Steritas GTI can play a key role in assessing the true value of new “steroid sparing” medications and provides examples of its use in clinical trials and real-world settings 1. The publication reviews the history and rationale for the development of the GTI, outlines the ways in which the instrument has been validated and used in both clinical trials and real-world investigations, and reviews the general instructions for use. In this blog article, we give you an easy-to-read introduction to this important peer-reviewed paper.

“The paper describes the rationale, background, and validation strategy for the GTI in detail, from the original concept of the instrument through its validation in both real-world experience and a phase 3 clinical trial that led to the approval of a first in class agent. The paper also provides new data pertaining to the MCID – minimum clinically important difference – and illustrates how the MCID can be applied to clinical trial data to confirm that reductions in glucocorticoid toxicity are not only statistically significant but clinically important.”

Following the publication of the paper, Dr Stone was interviewed by Seminars in Arthritis and Rheumatism for their podcast, which is embedded below:

Glucocorticoid toxicity used to be impossible to quantify

A staggering 50 million people – 1% of the world’s adult population – are on long-term glucocorticoids2. These compounds have been used to treat inflammatory conditions for more than seven decades. They rapidly suppress many types of inflammation; however, their use is associated with multiple side-effects and adverse events, which can be challenging to evaluate. Nearly 70 toxicities caused by glucocorticoids are commonly recognized and known to significantly impact patient quality of life. The relevance of steroid-toxicity is reflected, among other aspects, in the increasing number of publications on the subject from year to year (Figure 1). The complexity of the toxicities and the resulting measurement- and disease-related challenges posed a high hurdle to the development of an instrument to measure them. 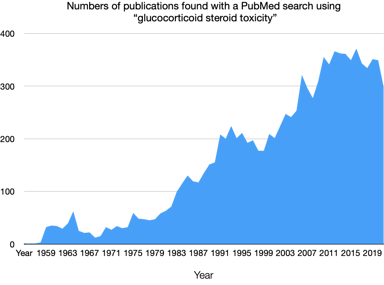 The GTI: a standardized, validated measure of GC toxicity

The Glucocorticoid Toxicity Index (GTI) was developed as a Clinician Reported Outcome Assessment Instrument to provide a standardized, systematic, validated measure of steroid-toxicity3. Its purpose is to measure change in glucocorticoid toxicity between two points in time: for example, between two time points at the point of care, or between the baseline visit and the time of the primary efficacy outcome assessment in a clinical trial. The Steritas GTI is FDA 21 CFR Part 11 enabled and provides a fast, accurate, and easy to implement, weighted outcome score of steroid-toxicity that equips clinicians and regulators to evaluate the impact of steroid-sparing treatments.

The process of validating the GTI spanned several years, including a real-world cohort of 101 patients with severe asthma 4 who were beginning treatment with mepolizumab, an anti-interleukin-5 receptor antagonist. Measuring steroid-toxicity systematically in individual patients is an important part of routine asthma care. The patients were receiving high-dose inhaled glucocorticoids in combination with other medications to control their asthma. In the cross-sectional component of the study, a measure of baseline GC toxicity based on GTI weights at study entry had a modest correlation with maintenance prednisolone dose, cumulative exposure in the prior year, and number of glucocorticoids boosts for asthma flares. The GTI also demonstrated strong associations with asthma-related quality-of-life and the St. George's Respiratory Questionnaire, both important patient-reported outcome measures in asthma studies.

To estimate the minimum clinically important difference (MCID) a distribution-based approach was used. In the case of the GTI, these data for the initial MCID estimate consisted of evaluations of toxicity change in a total of 510 patient assessments, performed by 34 clinicians. The MCID was assessed in a longitudinal study of the cohort of patients with severe asthma who were starting mepolizumab therapy.

GTI use in the ADVOCATE clinical trial

The GTI has been successfully used in several clinical trials, including the ADVOCATE trial, which was conducted to evaluate whether avacopan could replace a glucocorticoid-tapering regimen used in the treatment of ANCA-associated vasculitis. The trial demonstrated superiority of avacopan to a prednisone-based standard of care with respect to sustained remission at 52 weeks. Avacopan trial investigators reported the GTI as the most important secondary endpoint of efficacy5.

The GTI was developed by an international group of multi-specialty investigators whose professional experience is steeped in the use of glucocorticoids to treat inflammatory disease. These investigators are keenly aware of the complications of glucocorticoids and the importance of measuring their associated toxicities and mitigating their effects. The GTI has been developed and validated through a rigorous, rational process, and is now being employed in nearly two dozen inflammatory conditions that have been dependent on excessive glucocorticoid use for disease control for too long.