Determining which severe asthma patients are candidates for steroid-sparing biologics

The Global Initiative of Asthma estimates that asthma affects 334 million people worldwide.  Approximately 5% - or 17 million individuals - have severe, uncontrolled asthma despite attempts at treatment optimization. Oral glucocorticoids have been the mainstay of treatment. Recently, interest in the use of biologics to reduce steroid-toxicity has grown.

Given the robust literature on the multi-system adverse effects of steroids, the need for new  therapies is urgent. However, the costs of biological therapies are high. Thus, the ability of these new prescriptions to reduce steroid-toxicity is of paramount importance.

Morbidity for glucocorticoid exposure in severe asthma is usually described at a population level. In general, steroid-related toxicity occurs in a dose-dependent manner, but this population-based finding is of little use to the physician in the clinic or to individual patients.

Until the creation of the Steritas GTI, the management of severe asthma lacked a systematic approach to the measurement of treatment-related adverse events.

An observational cohort study was performed using the GTI for systematic assessment of steroid-associated morbidity among prednisolone-dependent patients under routine clinical care. The cohort consisted of 101 patients, all of whom received high-dose inhaled glucocorticoid in combination with additional controller medications. Of these patients, 82% were also receiving daily maintenance prednisolone. The median cumulative prednisolone exposure for the preceding 12 months was 4280 mg. Commonly used measures of morbidity, including validated patient-reported outcome measures (PROMs) were used to quantify quality-of-life (QoL) and asthma control in order to determine the relationship of these factors to steroid-toxicity. 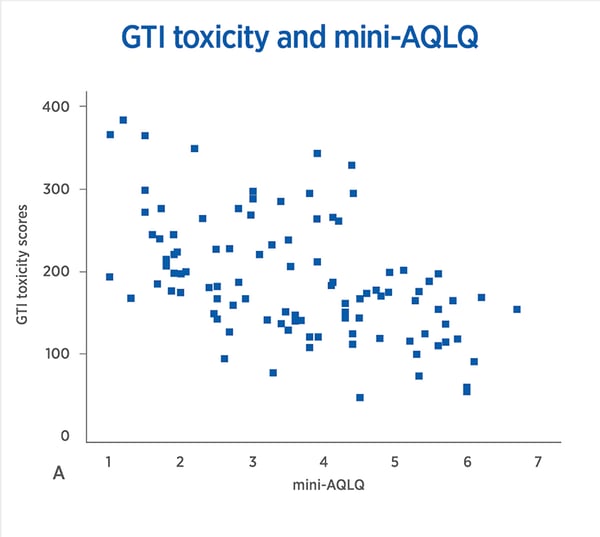 These findings suggest that individual susceptibilities to steroid-toxicity vary widely. In addition, baseline steroid exposure is an unreliable variable upon which to base the start or continuation of a biologic agent. Measuring steroid-toxicity systematically with the GTI is a better method of determining which patients would benefit from these new therapies. Given that one important purpose of biologics is to minimize the adverse effects of steroids, the measurement of toxicity reduction should be a key part of the discussion around the definition of response.

This highlights the importance of assessing steroid-toxicity in systematic longitudinal manner in the clinic as well as in clinical research.

Could the Steritas GTI be a useful efficacy and safety outcome measure in your next clinical trial?

Register to attend our webinar.