“Steroid toxicity is rampant and it can be fatal… bringing it onto the radar screen of the practicing physician is really, really important.” 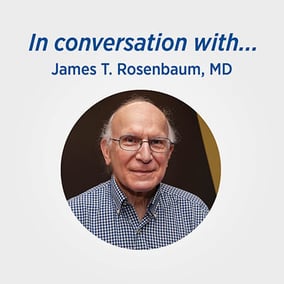 James T. Rosenbaum M.D. fell into ophthalmology by chance and is the only practicing rheumatologist/non-ophthalmologist in the world to serve as a chief of ophthalmology.

Medicine runs in Dr Rosenbaum’s family, the Edward E Rosenbaum Professorship in Inflammation Research he holds at Oregon Health & Science University is named after his father, two of his three brothers are doctors as are his wife and two daughters.

Dr Rosenbaum’s expertise is inflammation in and around the eye, despite being a rheumatologist by training: “Early in my career, I was trying to develop a rat model of reactive arthritis - and the rats developed a type of eye inflammation called uveitis, so my career took a 90-degree turn and much to my chagrin, I became an expert on eyes and how eyes get inflamed. It turns out that inflammation in or around the eye is often associated with inflammation elsewhere.”

In his practice, Dr Rosenbaum mostly sees patients with uveitis (inflammation inside the eye) - the condition that led to his journey into ophthalmology, a journey on which he has authored some 600 scholarly publications, that are mostly related to the intersection of rheumatology and ophthalmology.

He explains that “the standard first-line treatment for most forms of inflammation in and around the eye would be some sort of corticosteroid either topically, locally by injection, and frequently, orally.”

While uveitis isn’t a common disease, Dr Rosenbaum laments that the use of corticosteroids is common: “all too often, the amount of steroid prescribed is toxic to the patient and that’s in part because ophthalmologists are somewhat more comfortable prescribing prednisone or something in that family, rather than something like methotrexate or a steroid-sparing drug or biologic - despite the often being safer and more efficacious.”

“In one well-cited survey, the average patient taking prednisone for uveitis was taking more than 30 milligrams a day, and if we’re using something like prednisone for chronic illness, we’d want to get that dose down to a more physiologic level.”

“The strange thing is that many patients don’t want to take a drug like methotrexate or a biologic because they read about all these side effects, yet if you stay on a dose of 20 milligrams a day of prednisone for three months, the likelihood of experiencing several side-effects is 95%, whereas you could take methotrexate for 30 years and the likelihood of experiencing one side effect is around 15%”

“Prednisone is in a sense a bit like a narcotic, it's easy to use, it's quick and handy, but you become dependent on it and in the long run you suffer due to the dependency. For example, we know that steroid-toxicity leads to an increase in the propensity towards infection.”

“Sadly, steroid toxicity is rampant and it can be fatal, and it is also very preventable. So bringing steroid toxicity onto the radar screen of the practicing physician is really, really important.”

Dr Rosenbaum is an American physician-scientist who is Chief of Ophthalmology emeritus at the Legacy Devers Eye Institute, Portland, Oregon, where he held the Richard Chenoweth Chair, and Chief of Arthritis and Rheumatic Diseases at the Oregon Health & Science University where he holds the Edward E Rosenbaum Professorship in Inflammation Research